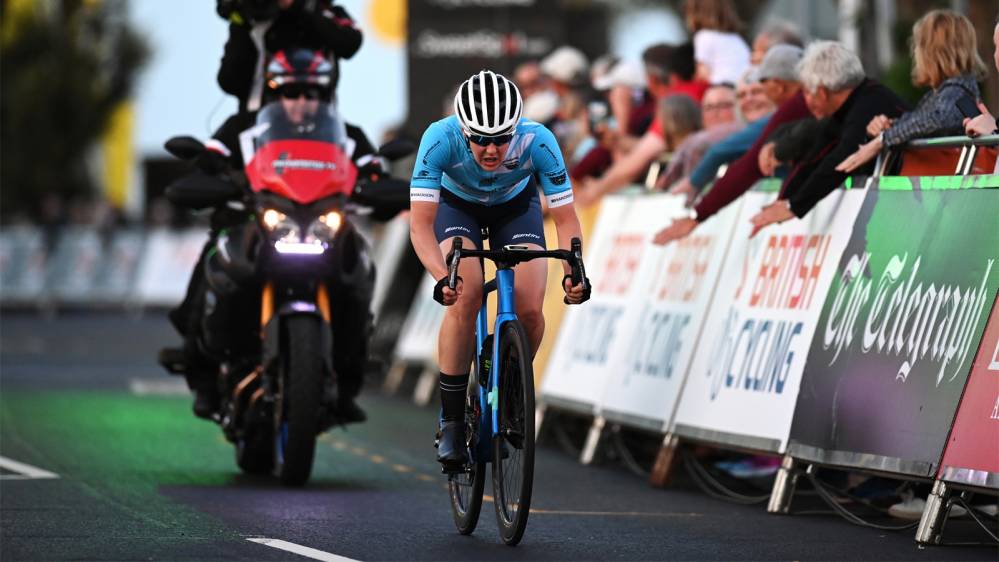 Round five of the series saw the familiar sight of leaders Wiv SunGod back on top of the podium in the men’s team classification, countered by a first time victory for Team Spectra Wiggle p/b Vitus in the women’s series in the evening’s second event.

That race saw Stuart storm clear after two laps before she set the fastest lap next time across the line. A little over a week on from her first individual series victory in Sunderland, she confidently rode away from the peloton and even had time to gesture to the crowd to cheer on as she built a 20-second lead within six laps. Wearing the blue Freewheel.co.uk sprints jersey on behalf of classification leader Jo Tindley (Pro-Noctis – Rotor – Redchilli Bikes p/b Heidi Kjeldsen), Stuart swept all the intermediate prizes along the way.

Sophie Lewis (CAMS – Basso), individual winner in Guisborough on Bank Holiday Monday who returned to the series for the first time after a spell on Great Britain track duty in Canada, began the counter move. She led the chase group of around a dozen riders along with Ellen McDermott (Team Boompods) and the Pro-Noctis – Rotor – Redchilli Bikes p/b Heidi Kjeldsen team. However, despite threatening to bring Stuart back into sight shortly after the halfway mark, the peloton couldn’t get the gap back into single figures.

Having trimmed the advantage to the low teens, Stuart’s fires were stoked in the closing stages and she increased her lead to more than 30 seconds in a metronomic display of riding that broke the will of those behind. The performance also saw her move to within five points of Tindley in the Freewheel.co.uk sprint standings.

“It feels unbelievable,” said Stuart, who combines racing with duties as a firefighter in Lancashire. “I didn’t expect to win at Sunderland and I didn’t expect to win here. They were two slightly different races– one breakaway with the group and then solo from quite early on tonight, which I didn’t think I’d hold to be honest. I’m still in a bit of shock.

“I didn’t think, even with five laps to go, that I had it in the bag. I kept sprinting all the way through. I looked up at 17 minutes on the clock and thought ‘what have I done!?’ It was a tough session tonight, but I kept pushing until the end.”

Behind, Becks Durrell placed sixth, Amira Mellor 10th and Sam Fawcett 16th to earn Team Spectra Wiggle p/b Vitus their maiden series victory in only their second season. The result also moved them closer to finishing second overall, as they now have a seven-point advantage over nearer challengers Team Boompods.

However, they trail Pro-Noctis – Rotor – Redchilli Bikes p/b Heidi Kjeldsen by 10 points, who look set to be crowned women’s champions for the first time in Manchester on Tuesday (21 May).

Video: highlights from round five of the Sportsbreaks.com Tour Series in Clacton

Wiv SunGod increased their overall lead in the men’s series to four points with two rounds – Barking and Manchester – remaining, thanks to the win on the night. Their dominance meant a clean sweep of the podium, with Bostock adding the evening’s fastest lap to an extended lead in the Freewheel.co.uk sprints jersey having won every sprint on the night in Clacton.

“We deserved it from how we rode, and how we’ve tried to ride in the past few rounds,” said Bostock. “It’s not really gone right [recently], but we’ve always been brave, always taken the race on, and it was nice tonight when it all paid off.”

Bostock crossed the line on Marine Parade a second clear of TRINITY’s Max Walker. His Wiv SunGod team-mates Matt Gibson and Jacob Scott placed third and fourth to set up a third team win in five rounds, one that was made comfortable by a last lap crash that split the front group.

Walker’s team-mate Sam Culverwell had looked the most likely to provide an upset – and a hat-trick of consecutive individual wins for his TRINITY team – but after being joined off the front by Charlie Tanfield (Ribble Weldtite Pro Cycling) the pair were caught with three to go, first by Bostock and then the group of the chasers.

“The race was a bit cagey tonight”, added Isle of Man native Bostock. “It was quite hard to split and it was quite hard to attack so it was sort of neutralised. My main focus was to make sure I got the sprints tonight, because I’d lost a few points in the last few rounds and I wanted to get my sprint points back.

“Then after the last sprint I just thought that I’d just ride for the individual. I think we had the team wrapped up at that point so switched my focus to just being in the right position, brought the two back that were off the front with two laps to go. Thankfully Max Walker came round me, gave me a bit of a lead out and then I knew from the sprints how to take the last corner, and got it right.”

Wiv SunGod head to Saturday’s London round with a four-point lead over Ribble Weldtite, who are their only realistic rivals. Wales Racing Academy sit third overall, 13 points off the pace, with Saint Piran a further two back.

Highlights of the Clacton-on-Sea event will be broadcast on ITV4 at 7pm on Friday 20 May. Racing resumes on Saturday (21 May) in London with the first ever Barking round, part of the Barking BikeFest presented by Amazon Key, a full day of celebration of cycling and sustainability with activities from 11am.

Elite racing action gets underway with the men’s race (5.30pm) followed by the women’s race (7.30pm), for which the winner will be presented with the Mary Wollstonecraft Cup – honouring the pioneering feminist who once lived in the borough.

Both events streamed will live on the Tour’s YouTube channel – youtube.com/thetourcycling – and Facebook page with no geo-restrictions.