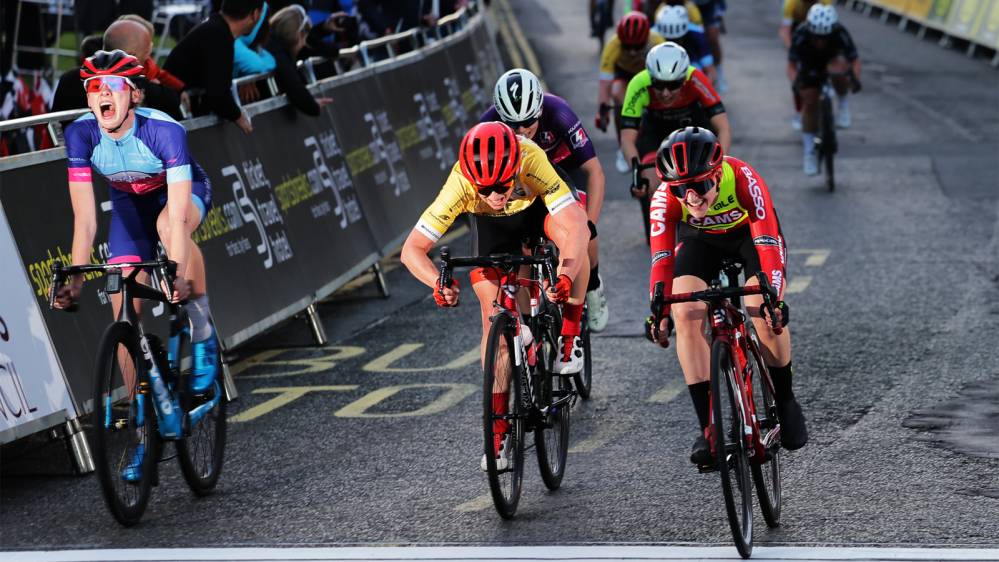 Both teams took the all-important team victory on the night in round two as the series visited the Scottish Borders for the first time. This was a historic night for the series, as the women’s race followed the men’s event for the first time since its inaugural 2009 season.

In the opening men’s race it was Wiv SunGod rider Jim Brown who took his first individual series win Brown and team-mate Matthew Bostock had been at the forefront from the start, driving the pace around the short circuit to stretch the peloton, and drag a select group of riders clear as a crash split the group behind.

The evening then turned into a duel between Wiv SunGod and defending champions Ribble Weldtite, with the pair of teams taking four of the top five spots. Dividing them was 17-year-old Noah Hobbs of Tekkerz, in fourth, who also took the fastest lap.

“I’m buzzing! Taking the one-two in both rounds is really good and we’d like to continue that if we can,” said Brown.

“We’ve got a good team, you know. We’ve got five really strong riders, so we can just get to the front and make it hard for everyone else.

“In the first five minutes we started putting the hammer down and the race split into a group of about 15. After that there were a lot of moves going, but I managed to slip away in the final and take the win.”

Wiv SunGod now hold a three point lead over the Wales Racing Academy at the top of the standings, whereas in the women’s series Pro-Noctis – Rotor – Redchilli Bikes p/b Heidi Kjeldsen have a dominant six point margin over Torelli – Cayman Islands – Scimitar and Team Boompods.

Taking the women’s individual victory was Megan Barker (CAMS – Basso), who has won three of the last four races held. However, Barker was isolated in the front group dominated by the series leaders, but did enough to head Emma Jeffers (Jadan – Vive Le Velo) and Jo Tindley (Pro-Noctis – Rotor – Redchilli Bikes p/b Heidi Kjeldsen) in the final sprint.

“It was pretty tough for me personally,” said Barker. “I think we had quite a difficult night as a team, so I ended up quite isolated in that front group with the full Pro – Noctis team attacking me like five times every lap!

“We just had to go for the individual win tonight so I just had to really stick at it, follow the wheels, not touch the wind as much as I could. I kind of was looking at the finish line every lap and figuring where I wanted to step out into the wind [and start my sprint].”

Although a first individual win in the series continues to elude Tindley, she also successfully defended the Freewheel.co.uk sprints jersey and now holds a 20-point gap in the standings after just two rounds.

Tindley said: “It was really interesting actually [to see the men racing first]. They do race differently to us and they are going to be faster but it was interesting to see just how they attacked. They literally strung out on the first lap and how it all formed for through the bunch. So we got a good impression of how it would be for us.

“We were aware that the other teams were going to go out hitting it hard after [round one in Guisborough], so we just waited to see how it played out. It just stayed fast; it was a fast night, it was full on.”

Highlights of the Galashiels event will be broadcast on ITV4 at 7pm on Thursday 5 May.  This year’s series continues on Tuesday (10 May) as Sunderland hosts round three. The women’s race around Mowbray Park (5:30pm) will be followed by the men’s (7:30pm).

Watch all of the action from this year’s Sportsbreaks.com Tour Series live and for free on the Tour Series website and YouTube channel.

Click here for full results from round two in Galashiels.