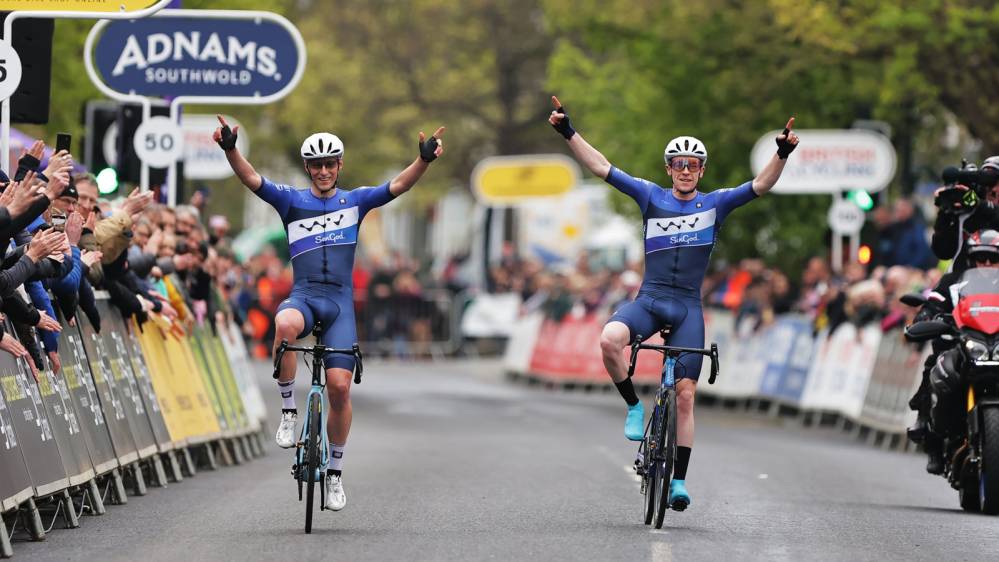 After a disastrous start to the series here in 2021, the first men’s race of this year’s event couldn’t have gone any better for Wiv SunGod, as Thomas Mein and Matthew Bostock broke clear on lap one and almost lapped the entire field.

Mein, the reigning British cyclo-cross champion, took his first individual series win ahead of Bostock after the pair delivered an unforgettable victory salute. Impressively, only 0.001s separated the duo across the line, making it the closest-ever finish in series history.

Behind, Matthew Gibson placed fifth in the rain-affected race to seal the team win for Tim Elverson’s squad.

Wales Racing Academy impressed en route to finishing second on the day, ahead of TEKKERZ, TRINITY Racing and Saint Piran.

“We went on the first lap and just kept on going,” said Mein, who also leads the Freewheel.co.uk sprints competition after round one. “It was pretty much game over for everyone else when we got away, so that’s a bit of a dream scenario.

“Getting away with team-mates doesn’t happen often so you’ve just got to make the most of those chances.

“It couldn’t have gone any better to be honest, so now we’ve got to carry on doing that for the rest of the series.”

Tindley and eventual individual winner Sophie Lewis (CAMS – Basso) also broke away in the early laps, before Ellmore produced a fine effort to bridge across to the leaders.

Despite leading out the sprint, Tindley could only place second here for the second year running, as promising track talent Lewis pipped her to the line. Behind, Sammie Stuart (Team Brother UK – LDN) jumped clear from the peloton to finish fourth.

Corinne Side was Pro – Noctis – Rotor – Redchilli Bikes p/b Heidi Kjeldsen’s third-ranked finisher in 12th as Rick Lister’s team started strongly in the series once again. Tindley scooped up 19 out of a maximum 20 points on offer to take the lead in the Freewheel.co.uk sprints classification, a competition she won in last year’s series.

“The first round is always the one that you never really know how it’s going to go,” said Tindley. “You’ve done all this training but you don’t know how everyone else is going and so much could happen within one race. So, it’s really good to get the first one out of the way.

“It’s a new circuit for round two [in Guisborough], so I think we will be defending more than anything and just seeing how it goes. We’ll try to keep an eye on things!”

CAMS – Basso finished second on the day to leave Guisborough with just a one-point deficit in the overall standings, with Team Boompods taking third.

“It’s given me a lot of confidence [going into the next few races],” said Lewis. “It’s nice that we’re in a good place for the rest of the series.

“It was a really good race and I’m really pleased with how it went. I knew that last year about five riders went clear pretty early on, so I knew I had to be up there right from the start. I did feel a bit out numbered but I did what I needed to do.”

This year’s series continues on Wednesday (4 May) as Galashiels hosts round two. In a new-for-2022 innovation, the Scottish Borders round will see the women’s race (7:30pm) follow the men’s (5:30pm).

Watch all of the action from this year’s Sportsbreaks.com Tour Series live and for free on the Tour Series website and YouTube channel.

Click here for full results from round one in Guisborough.